A Book Review- The Krishna Key by Ashwin Sanghi 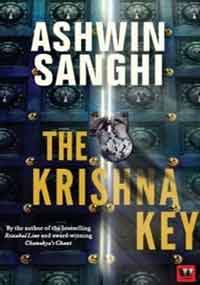 I jumped at the chance of reviewing a thriller that too by Ashwin Sanghi; I mean, I hadnt read any of his previous works, but who hasn't heard of Chanakya's Chant and Rozabel Line?
The cover of the book is decent enough for a thriller. The slightly open doors with an ancient looking lock binding them together creates a ready impression of some secret waiting to be unfolded.

The back cover with the one paragraph gist is where the actual magic of the story begins. It is crisp and short but the ending line gives you a proper punch on your face and you cant wait to get started with the book.

The story revolves around a serial killer who believes himself to be the last avatar of Lord Vishnu and is intent upon finding the four similar seals from the time of Lord Krishna which would ultimately lead to the 'Krishna Key' which would establish concrete facts about the actual existence of the Indian Mythology.
The protagonist Ram Mohan Saini, a historian was wrongly suspected for the murder of his best chum Dr. Varshney who was the archaeologist behind the search and retrieval of this ancient secret of Krishna.

Hoodwinking the police, and dashing from Dwarka, to Somnath to the chilly Mount Kailash, Saini along with his doctoral student Priya embark on an exciting and dangerous quest to find the base plate and save the other confidants of Dr. Varshney from a similar fate as him.

Fast and intense, The Krishna key flows at a heart-stopping pace and ticks every box in making for a good thriller. Sanghi shows a flair for combining mythology and history with suspense and the vedic shlokas laced in between add a different interest to the story. So do the symbols, maps and images which make the plot even more detailed and exciting
I really love the story of Krishna written in 1st person which is told simultaneously with the main plot; it was refreshing to recall the stories from Bhagavatam.
The extensive research done by the author on Mahabharata, Indian civilizations is evident from the novel itself, though so much information makes it a bit confusing and tedious to follow. But Ashwin Sanghi's narrative style erases off whatever lag there was in the story due to all the details and twists it in an interesting manner at the end. The character sketches done by the author are commendable too.

The only thing I didnt like about the story was the haphazard arrangement of certain events. As in, the event takes place before and the dialogues and scenes related to it are described later. So its brings a matter of doubt regarding the exact time of the event in question. Moreover for the readers well versed with the Hindu Mythology and Avatars of Lord Vishnu; the revelation of Tarak Vakil comes much before the literal revelation by the protagonist Saini. The name of the village, his family background associations with the stud farm, the sword, Shuka the parrot point in obvious directions

The Krishna Key despite being an excellent, refreshing story in itself holds strong resemblance with Dan Brown's Da Vinci Code and Angels and Demons.

Nevertheless, owing to the crisp writing style and good plot, I would rate this book a 8/10 and would suggest all thriller lovers to grab a copy now!
As for myself, I am getting Chanakya's Chant and the Rozabel line as soon as possible :D

This review is a part of Book Reviews Program at Blogadda. A million thanks to Blogadda for giving me the wonderful opportunity to review such a great book!